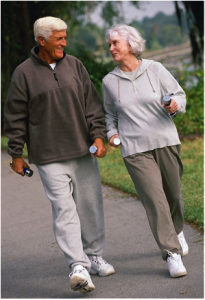 80-year-olds looking like they’re 40?
Increasing physical frailty, arthritis, and osteoporosis as you age is commonly accepted as “a fact of life.” Until recently, most studies showed that after the age of 40, people typically lose eight percent or more of their muscle mass with each passing decade. But newer research suggests that this is not a foregone conclusion. A study of 40 competitive runners, cyclists, and swimmers, ranging in age from 40 to 81, found no evidence of deterioration. The athletes in their 70s and 80s had almost as much thigh muscle mass as the athletes in their 40s.

From the New York Times, Dr. Vonda Wright, who oversaw the study, said, “We think these are very encouraging results…They suggest strongly that people don’t have to lose muscle mass and function as they grow older. The changes that we’ve assumed were due to aging and therefore were unstoppable seem actually to be caused by inactivity. And that can be changed.”

Lifelong activity is best, but it’s never too late to start.
Over the past several years, researchers have discovered that it is indeed possible to restore the ability of old human muscle to repair and rebuild itself. However, the need to keep aging bones and muscles in shape has also been demonstrated, as long periods of atrophy are more challenging to overcome. These findings fall into the category of common sense, along the lines of “use it or lose it.” And as you age, physical exercise becomes an ever more important aspect of optimal health and longevity.

The good news is that it’s really never too late to start an exercise program, even if you’ve been inactive for a long time. Just keep in mind that older muscles do not respond as well to sudden bouts of exercise, so to take precautions and start off slow, to avoid injury.

A Good Place to Start
Ideally your fitness program should be comprehensive, providing the necessary balance-training activities for stability while also improving your strength, flexibility, cardiovascular fitness, and fat-burning capabilities. This is where we can use the

During our [LivFit] exercise program, you raise your heart rate up to your anaerobic threshold for 20-30 seconds followed by a 90-second recovery period. You repeat this cycle for a total of 15 minutes using various exercises that challenge your core musculature, balance, and endurance strength.

These [LivFit] protocols are particularly beneficial for aging bodies as this type of interval training triggers the natural production of human growth hormone (HGH), also known as “the fitness hormone.” HGH plays an integral role in maintaining youthfulness and strength. While anaerobic exercises may seem too advanced for the elderly, don’t let the intensity dissuade you! Rest assured you can perform these exercises at ANY age. The only difference is that, the older you are, the lower your maximum heart rate will be.

In our next post, we’ll expand on the exercises and diet needed to stop arthritis and increase bone mass. Stay tuned!

[LivFit] – October 23, 30, and November 6, 6:00pm, at our downtown Roanoke, VA chiropractic office.
Our 3-week hallmark nutrition and exercise seminar teaches not just what to eat, but how to do it in a busy world. We focus on the techniques that have helped hundreds lose weight, drop blood pressure, increase muscle, and reduce fatigue.

Email us to reserve your spot at these classes.

About the Author: admin