There has been a lot of discussion lately about the purchasing of anti-bacterial cleaners. With the recent COVID-19 crisis, store shelves have been ravaged with customers stockpiling everything from hand sanitizer, soap, Mr. Fantastic spray, toilet paper, and more. The frantic race to clean one’s home and work place with off-the-shelf cleaning products left many not even asking a few important questions:

Are there harmful chemicals present in the product that could cause harm?

Several months ago my daughter Elisa asked these questions and designed a science fair experiment to test both natural and industrial surface cleaners. The results were surprising, as she observed how some highly recognized products performed poorly and some natural products performed very well. In light of the current Coronavirus epidemic and shortage of surface cleaners found in stores, I thought it was appropriate to share some of her findings. I realize that this is only one small study, and that the virus tested was not the Coronavirus, but the results are still interesting and perhaps helpful to some.

We all strive to have a clean, healthy life for our families. If countertops are not efficiently cleaned, the bacteria left could lead to many diseases and sicknesses. Thousands of people each year become sick with salmonella, a disease from raw chicken. In Australia alone, around 11,500 people are affected by food poisoning every day. The symptoms of salmonella are vomiting, diarrhea, nausea, headaches, chills, fever, and many more. People often receive this sickness by uncleaned countertops. 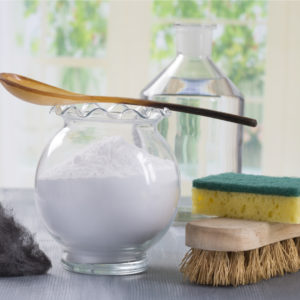 Chemical cleaners claim to be the best products for your countertops, but the untold truth is the chemicals and fumes can cause asthma, trigger many allergies, and even cause cancer. Surveys by the Federal Centers for Disease Control and Prevention have detected a dramatic change as 1 of every 10 children in the U.S. have asthma. Some of these many cases were caused by harmful fumes from chemical cleaners. Antibacterials such as triclosan, which is found in many chemical cleaners, can enter the environment and accumulate over time, leading to antibiotic resistance. The World Health Organization refers to antimicrobial resistance as a “looming crisis in which common and treatable infections are becoming life-threatening.” People can receive cancer by exposure to chemicals found in the cleaners. One recent retrospective study by the Silent Spring Institute that surveyed 1,500 Massachusetts women, half of whom had been diagnosed with breast cancer, suggested a link to chemical cleaners. However, chemical cleaners can possibly be more effective at cleaning than natural cleaners because of the chemicals used.

Ellie cleaned a granite kitchen countertop with a 6.25% bleach solution and a clean paper towel. She marked off a grid on the countertop of eight 6” x 6” squares with painters tape, labeling each grid. Raw chicken juice, that had been sitting at room temperature for 48 hours, was then spread over 7 of the squares, leaving one grid clean as a control. Six of the grids were cleaned with various natural and industrial surface cleaners, leaving one dirty grid as a second control.

The six cleaners were Mr. Fantastic spray, Clorox wipes, soap and water, water only, Norwex cleaning cloth, and Nature’s Shield essential oil spray (water and essential oil only). Each grid was cleaned with one of the respected cleaners and then a sample swab was taken and plated on a Petri dish. Each Petri dish was labeled and allowed to rest in an incubator for 48 hours. The dishes were removed and the number of colonies were counted and recorded for analysis.

The results of our experiment:

We found that our two control dishes produced widely different results with Control 1 (clean countertop only) producing only two colonies the first round and 0 the second. Control 2 (bacteria covered countertop/no cleaner added) produced 165 colonies in the first test and 224 in the second. 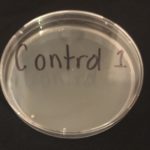 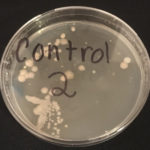 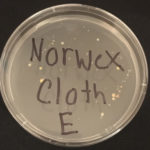 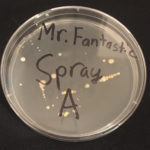 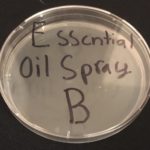 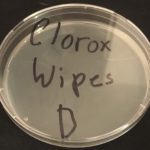 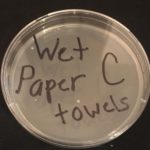 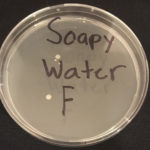 Our results showed that some natural products cleaned the countertops as well as the chemical cleaners. 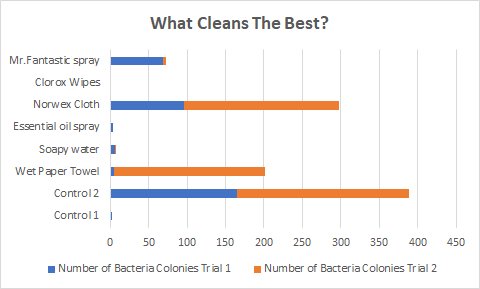 Many people prefer to use natural cleaners because they avoid the harmful fumes produced by many of the chemical cleaners. Some people avoid using natural cleaners because of the assumed risk that natural cleaners will not thoroughly clean and therefore increase the risk of sickness and disease. We found this fear to be true in our study with a Norwex cleaning cloth. Norwex representatives often claim their products destroy all bacteria from countertops and other kitchen surfaces. However, in this study, their claims proved false as the experiments revealed the growth of 96 colonies in the first trial and 201 colonies in the second trial. This product did not destroy even half of the bacteria of Control 2. (See petri picture ‘Control 2’ and Figure 1.) This product could be harmful to the user because if the countertop is not properly cleaned, it could lead to illnesses or diseases. These could include salmonella, a disease caused by raw meat. Another example is Listeriosis; this disease can give you fever, muscle aches, nausea, and diarrhea. Still other diseases have been linked to foodborne pathogens including Hepatitis A and Botulism. These are only four of the many diseases people can receive from uncleaned countertops. According to our experiment, one should use caution when using this product.

We did find that some natural cleaners did surprisingly well. Soapy water is an example. (See petri picture ‘Soapy Water’ and Figure 2.) How could soapy water clean better than Mr.Fantastic spray, a commercialized industrial cleaner? It is possible that the water just washed most of the chicken bacteria away leaving us with just a few bacteria colonies in each trial. Although soapy water killed the majority of the bacteria, it should not be trusted while cleaning as it showed to be unable to fully sanitize the countertop square. When eating food, it is not healthy to digest 6 colonies of bacteria.Therefore, one should be careful when cleaning countertops with only soapy water.

The essential oil spray was surprisingly very successful. This product is a natural homemade cleaner that reveals the least amount of bacteria colonies for the natural cleaners. The natural spray killed the highest amount of bacteria of the natural cleaners allowing for the growth of only 3 bacterial colonies. It cleaned better than the chemical cleaner, Mr. Fantastic. Only the chemical cleaner, Clorox Wipes, were able to clean the countertop slightly more effectively, as it allowed the growth of only 1 bacterial colony. In our study, Clorox Wipes was proven to have the best results. However, one should be cautious while using this product because Clorox wipes can have possible harmful interactions. Their own label states that the product can cause eye and skin irritation. Similar chemical cleaners also have other questionable side effects. 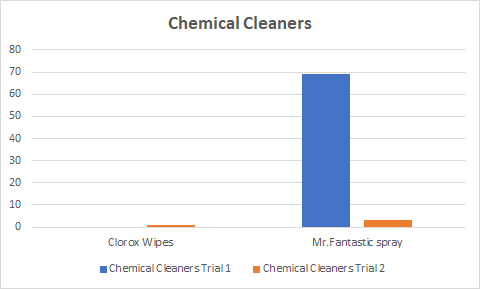 Mr. Fantastic Spray revealed 69 bacteria colonies the first time but only three colonies in the second test. Is this then a reliable product? When combined with the harmful chemicals in this product, one might want to be very cautious before using it. Chemical companies claim to have the most effective cleaner for your countertops. On their bottles they do not label the harmful chemicals. They also do not tell the user that the fumes from the chemicals can cause asthma, trigger allergies, and even cause cancer which can end in death.

We found some products to be reliable and consistent in both tests. Clorox wipes were one example, as well as the essential oil spray, and soapy water. All of these products showed both reliability and effectiveness in cleaning a countertop of bacteria.

We also found some inconsistent and unreliable results with two of the cleaners we studied. The wet paper towel killed all but 6 colonies in the first test while in the second test it allowed a total of 196 colonies to grow. It is possible that in the first test the water completely wiped away most of the bacteria. However, in the second test, it failed to clean the bacteria, leaving a large number of bacteria left over. The other perplexing result was Mr. Fantastic spray. This industrial product claims to be the best cleaner for your countertops. In our first test, we noticed that this product did very poorly. The petri dish produced a large amount of 69 bacterial colonies while in the second test, the product revealed a small sum of 3 colonies. Again, it is very difficult to recommend this product based on our findings.

In conclusion, people should be careful cleaning their countertops. Clorox wipes did the best job destroying bacteria. If harmful chemicals are a concern, an essential oil spray may be the best alternative. In this study, we found both natural and chemical cleaners can be unreliable in cleaning countertops thoroughly. Everyone needs to take foodborne illnesses seriously and should be aware of what to use to clean and sanitize food preparation areas.

The essential oil recipe used in this study was Now Brand’s Nature’s Shield. A small glass spray bottle was filled with 2 ounces of water and 20 drops of the Nature’s shield. This inexpensive surface cleaner shows promise in being able to keep most surfaces clean and healthy.