B12 Deficiency and You

B12 Deficiency and You

Why does B12 deficiency go undiagnosed?

B12 deficiency is often not diagnosed because it is not routinely tested by most physicians. Likewise, when it is tested, the low end of the laboratory reference range is too low. Many B12 deficient people have so-called “normal” levels of B12.

If you fall in the functional low levels of B12 you may still require treatment. Often, further testing reveals an elevated urinary methylmalonic acid (MMA), homocysteine, or holotranscobalamin, which are other markers of a deficiency in vitamin B12. There are four stages of B12 deficiency and the serum B12 test doesn’t typically test positive until stage three or four.

What is vitamin B12 and why do you need it?

Vitamin B12 works together with folate in the synthesis of DNA, red blood cells and in the production of the myelin sheath around nerves. Here are some of the most common vitamin B12 deficiency symptoms: 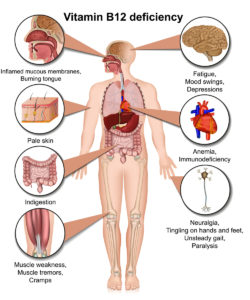 These symptoms are primarily due to elevated homocysteine levels that build up in the body because of the lack of vitamin B12. B12 is required to convert homocysteine back into methionine during cellular metabolism. As you can see from the symptom list, B12 deficiency can affect nearly every system in the body.

Why is B12 deficiency so common?

Vitamin B12 is not produced in the body and has to solely come from absorption of foods containing B12. The absorption of B12 is complex and involves several steps, any of which can go wrong and lead to B12 deficiency. Here are some of the problems that can cause B12 malabsorption:

This explains why a deficiency can occur even in people eating large amounts of B12-containing foods. B12 can only be found in animal products as it is produced in the gut of animals. It’s the only vitamin we can’t obtain from plants or sunlight. Plants don’t need B12, so they don’t store it.

Who is at risk for B12 deficiency?

People aged 60 or over are at higher risk of B12 deficiency, as many suffer from improper absorption of all vitamins, proteins and healthy fats. Those who are on proton pump inhibitors will suffer a similar fate as low stomach acid decreases the intestinal lining’s ability to absorb nutrients. Similarly, those with chronic inflammatory bowel diseases such as Crohn’s, ulcerative colitis, celiac, or severe IBS are often vitamin B12 deficient. Just a side note, patients with these conditions may suffer from a large list of vitamin deficiencies, so proper supplementation is very important. 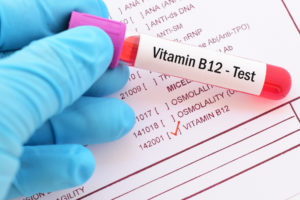 How do you treat a B12 deficiency?

One of the greatest tragedies of the B12 deficiency epidemic is that diagnosis and treatment are relatively easy and inexpensive—especially when compared to the treatment patients will need if they are in a late stage of deficiency. A B12 test can be performed by any laboratory, and it should be covered by insurance. Our office is happy to order it for you if you need a physician to do so.

For those suffering with Pernicious anemia, severe Crohn’s or other inflammatory bowel disorders, or those suffering with the later stages of B12 deficiency including neurological disorders; I recommend you find a competent medical doctor to help you. You will need their expertise in navigating the multi-system organ dysfunctions involved in these ongoing cases. You will also most likely need an injectable B12 shot, which they are the only medical professionals licensed to provide.

For those with more functionally low levels of B12, supplementation may be sufficient. Cyanocobalamin is the most frequently used form of B12 supplementation in the U.S., however, recent evidence suggests that methylcobalamin may be superior—especially for neurological disease.

Japanese studies indicate that methylcobalamin is more effective in treating neurological symptoms because it bypasses several potential problems in the B12 absorption cycle. On top of that, methylcobalamin provides the body with methyl groups that play a role in various biological processes important to overall health. I frequently find that taking B12 along with a wider array of B-vitamins increases the desired effects of the supplementation.

Currently, my favorite form of B12 supplementation would be NOW Foods’ Ultra B12.  I like this brand because not only does it derive its B12 from cyanocobalamin and methylcobalamin, it also includes a complete B-vitamin complex. The liquid form is easy to take, simply place one teaspoon in the mouth and hold it for 30 seconds before swallowing. 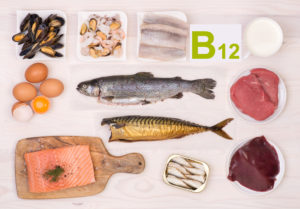 Everyone should supplement their diet through real food. This is always the best way to get the vitamins and nutrients you need. If you’re low on B12, try eating some vitamin-rich foods such as seafood (oysters and clams) and animal organ meats (liver, heart, and kidney).

Eating other kinds of seafood, like octopus, fish eggs, lobster, and crab, can also help you attain normal B12 levels. If none of these foods sound appealing to you, lamb, beef, eggs and cheese contain B12 but not near as high as shellfish and organ meats.

What to do if you’re experiencing Vitamin B12 deficiency symptoms

If you suspect you have a deficiency, the first step is to get tested. You need an accurate baseline to work from. If you are B12 deficient, the next step is to identify the mechanism causing the deficiency. You’ll probably need help from a medical practitioner for this part. Once the mechanism is identified, the appropriate form (injection, oral, sublingual or nasal) of supplementation, the dose and the length of treatment can be selected.

So, next time you or someone you know is “having a senior moment,” remember: It might not be “just aging.” It could be B12 deficiency. If you have more questions on this subject, feel free to ask or email us. Remember, our entire team is here to serve you and help you become healthier than you have ever been.

To help make getting healthier easier for you, our B-100 Complex, adult and children’s multivitamins, and the new Ultra B12 vitamin supplement are 10% off this week.