Plant Based vs. Meat Based Diets: Which is better for the athlete?

Plant Based vs. Meat Based Diets: Which is better for the athlete?

Recently, I had a good discussion in the office that sparked the idea to write this blog post. The conversation centered around what is the optimal diet for athletes? While I don’t believe there is one optimal diet for every person, I do think there are characteristics that all healthy diets share. Namely, that every person does better on whole, natural foods that are devoid of man-made additives and sugar.

There has been a lot of attention lately by experts and celebrities arguing that a plant-based, vegan diet is optimal for athletes and that animal foods are harmful for athletic performance and overall health. However, when you scientifically break down this argument, the research points to a different conclusion.  In this post, I hope to clean up some of the myths that surround these ideas and highlight some of the research to better aid those athletes trying to perform better.

Myth #1: Athletes can get what they need from a plant based only diet.

While some might feel better short term on a plant based only diet, the long term needs of an athlete dictate a larger amount of protein and micronutrients than what plant based diets can provide. For instance, you would have to eat almost one-third of a cup of peanut butter to equal the protein in 3 ounces of beef or three eggs. Athletes in general need more protein than the recommended dietary allowance (RDA), and the specific amount they need will depend on the type of sport they’re involved in, as well as their health status, age, sex, and more.

Myth #2: Athletes have more energy on a plant based diet vs. meat based diet.

Plant based diets are higher in carbs than a meat based diet and carbs are a great source of energy. However, for explosive and glycolytic activities, like those found with endurance sports, a meat based diet can burn fat as the primary fuel source. This will provide a much greater energy source for these activities with a much less volume of food intake.

There are many non-dietary factors that influence athletic performance, including genetics, epigenetics, stress, sleep, work ethic, talent, coaching, etc. These are significant and most likely influence athletic performance greater than dietary changes. If an athlete notices an increase of energy after switching to a plant based or meat based diet, I generally find it is because they became a “nutrivore”. The standard American diet is devoid of nutrients and the switch to any greater nutrient filled diet plan is an improvement that generates better results.

Please do not misunderstand me, a plant based diet does have value. I have found that athletes and non-athletes show improvement during the initial phases of an all plant based diet. That is why I recommend it for an initial detox phase. However, after a while, you see a significant decline in performance and well-being if that dietary program is followed for any prolonged period of time. I frequently recommend that an athlete detox at the beginning of a long training program for anywhere between 2 days to 3 weeks. The worse the athlete has been eating the longer they will need to detox.

The myth that eating meat will more likely cause a diseased state or reduce an athlete’s performance is prevalent. What is often lost on many, is that eating a nutrient-dense diet based on whole foods is not the same as eating an ultra-processed standard American diet. If an athlete was subsisting on a junk food diet of Popeye’s and KFC, it makes sense that they may feel better on a higher quality diet that includes fresh fruits and vegetables in place of fried, processed, and refined foods.

Some studies seem to promote the idea that an all plant based diet will provide greater health. However, these studies frequently have a fatal flaw, known as the “healthy-user bias.” People who engage in a behavior that is seen as “healthy” are more likely to engage in other behaviors that are also perceived as healthy, and vice versa. Red meat, for example, has been perceived as unhealthy for so long that people who eat more of it are also more likely to engage in unhealthy habits, like smoking, being physically inactive, and eating fewer fruits and vegetables. Confounding factors like the healthy-user bias influences research and are difficult to control.

One of the inevitable results of doing this is that many observational studies end up comparing two groups of people that are not at all similar, and this casts doubt on the findings. This is how we get misleading claims that vegetarians and vegans live longer than omnivores, or red meat causes serious health conditions like cancer or cardiovascular disease, or that eating meat disrupts your gut microbiome. 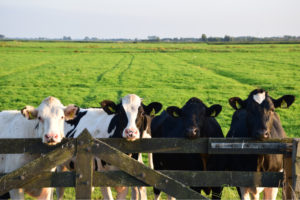 I bring this up because many people are using this ethical concern to persuade athletes to move towards a plant based diet. Concerns that producing meat takes up too much farmland, and that livestock consume valuable food/calories that could be used to feed humans. Some even feel that livestock are responsible for a large percentage of greenhouse gas emissions and that shifting to a plant-based diet would free up land that could be used to grow crops to reduce greenhouse gases.

In reality, most of the land that is used to cultivate livestock is suitable only for grazing. It could not be used for crop production. And most livestock feed is not grown specifically for livestock—it is a byproduct of food overproduction processes. Therefore, eliminating livestock wouldn’t increase the food supply for humans. Furthermore, greenhouse gases are reduced by all plants including grasses that are grazed upon by livestock. Grass-fed livestock even helps to maintain these pastures and return nutrients to the soil aiding plant growth. Even the methane gas produced by livestock is converted by microbes into nitrogen helping the plants to thrive. This natural life cycle is important to keeping our environment healthy.

Even though it may be possible for some athletes to thrive on a plant-based diet, extensive research and my own clinical experience suggests that a vegan diet is not optimal for most people. I would highly encourage every human being to ruthlessly examine everything they include in their diet. Likewise, I would highly suggest that they include both whole plant and meat sources into a nutrient dense diet. If you have any questions or comments please let us know. Remember, our goal is to help you become healthier than you have ever been through chiropractic care, exercise, and nutrition.